React Native School is 40% off when you sign up before December 4! 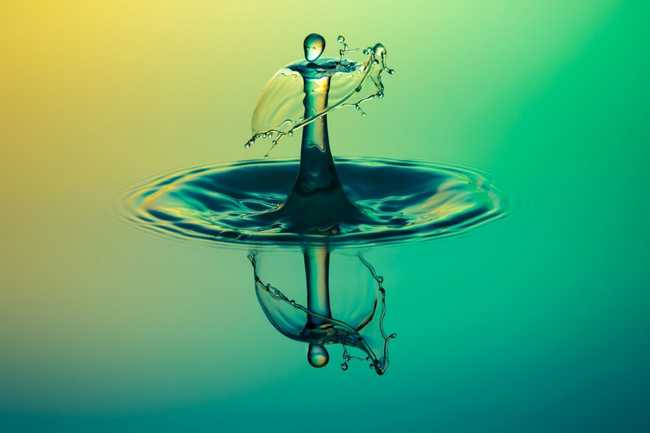 Wait! I've updated this lesson with a much easier, and up-to-date library. Simple Splash/Launch/Boot Screen in React Native (iOS and Android)

I’m often asked about that last mile of developing a React Native app (actually getting it into the app store). There’s more to it than just building your app and sending it off to Apple/Google — you’ve got to add icons, splash screens, write descriptions, and more before sending it off for review.

Using Expo or Create React Native App? No need to go through all of this — you can follow their docs and be set up in no time.

In this tutorial we’ll be working in the platform IDEs and writing a bit of native code. Don’t worry, I’ll walk you through everything. The final code is available on Github.

Protip: Set up source control before following along! Not only is it a good way to revert changes when you make a mistake but it’s also a great way to see exactly what changed to enable the splash screen.

In a previous version of this tutorial I showed how to simply use a large image to create the splash screen. This can have issues scaling between the ever growing number of screen resolutions.

So, instead, we’ll start with a single image that looks a lot like our icon. The idea here is two fold:

You can get those images from Github. 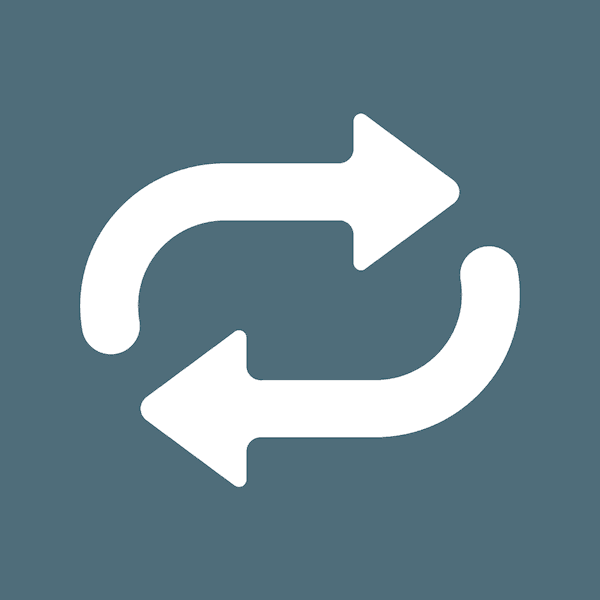 If you’ve tried to set up a splash screen in React Native then you may have experience a white screen flash before your content loads. If your app has a white background this is often not very noticable, but it’s still a pain. Today we’re going to make it very noticable if we have any flashes of white. To do that we’ll set a dark background color in our app.

All this did was set the background color to #4F6D7A, the text color to #F5FCFF, and use light text in the status bar.

If you’re new to Xcode the video may help you more easily follow along.

First open the project in Xcode.

We then want to add a new image asset inside of Xcode. You can access that in the left navigator — SplashExample > SplashExample > Imagex.xcassets and then pressing the “+” in the second left most navigator. Call it “SplashIcon” 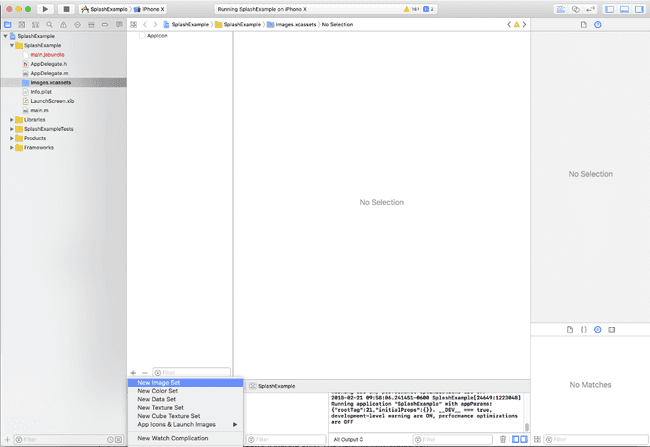 Then go ahead and add the three images you downloaded earlier. They’ll automatically attach themselves to the right pixel density. 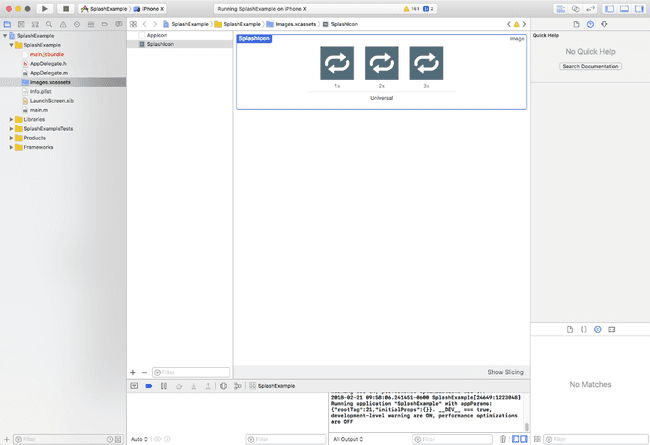 You can then open LaunchScreen.xib, again available in the left most navigator. You should see this. 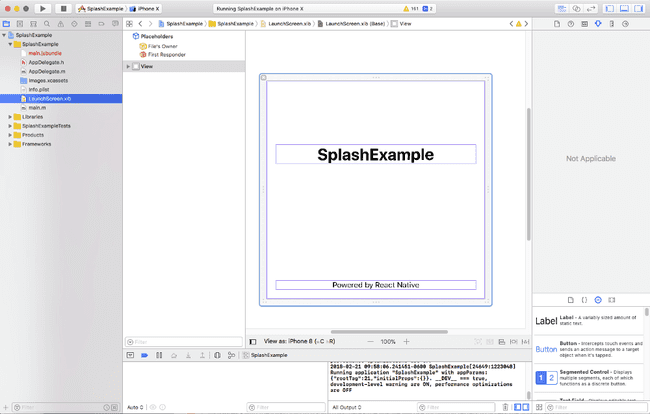 Select the two text elements (“SplashExample” and “Powered by React Native”) and delete them.

Next we’ll set the background color of the View. Select “View” in the second left most navigator. Then, in the right most navigator, choose “Background” which will pop up a picker dialog. 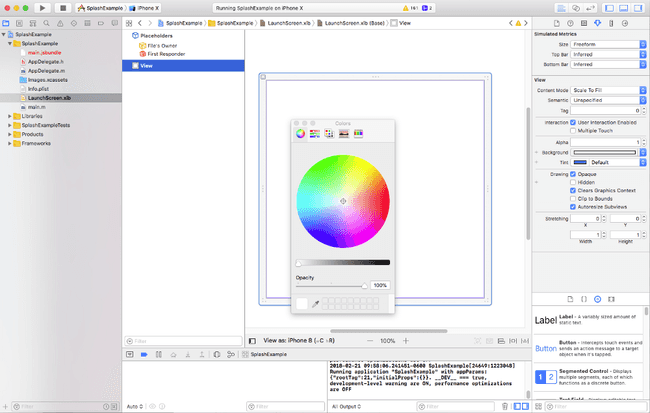 Protip: It took me forever to find this but if you choose the second option in the color picker and then choose “RGB Sliders” you can then enter a hex value. 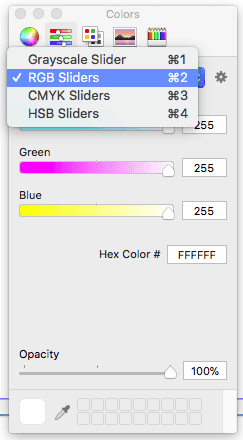 Go ahead and set the background color to #4F6D7A.

We then want to add an Image View to our splash screen. You can find that by pressing the third option in the bottom right menu and searching for “image”. When you’ve got that drag it onto the blue View. 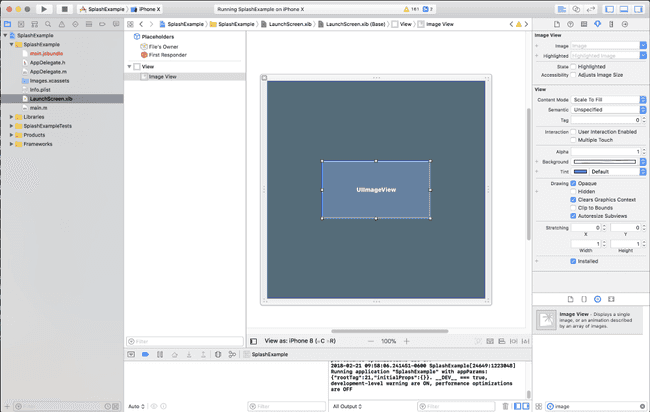 You then want to set the image source from the top right. When you select the image dropdown any images from Images.xcassets should show up — choose SplashIcon. 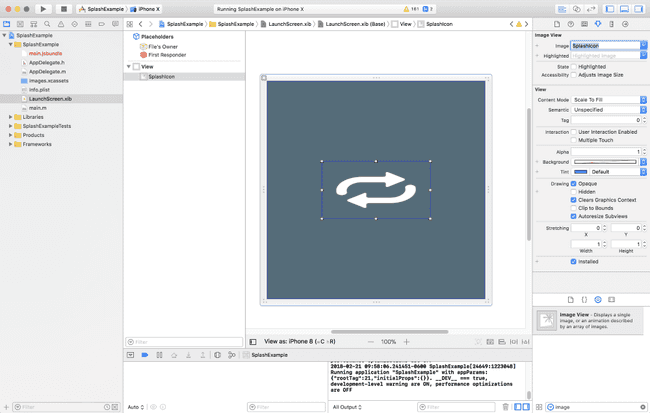 Now to fix proportions set the “Content Mode” to “Aspect Fit”. This is available in the right most menu, second down. 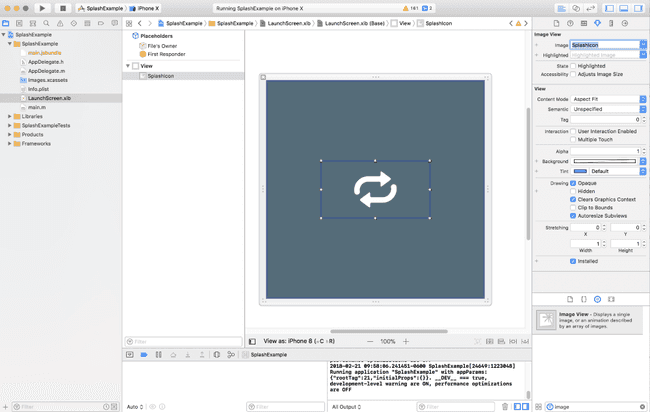 Next, we need to make sure our icon stays centered in the screen regardless of what device the app is running on. To do this, in the right most navigator, choose the fifth icon at the top (the one that looks like a ruler). 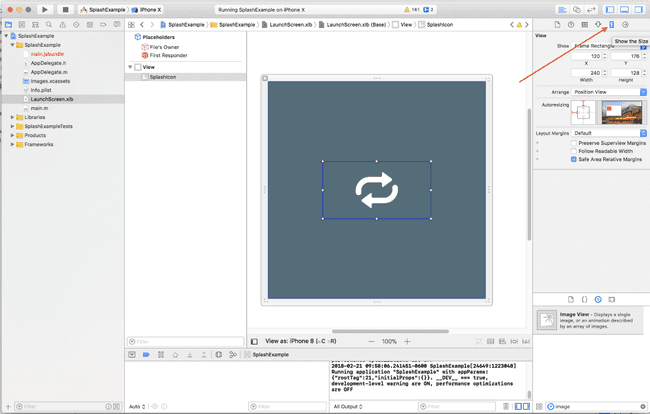 Within the “Autoresizing” section you’ll want to disable the outter red lines and enable the inner red arrows. This will allow the image to stay centered regardless of the screen dimensions. 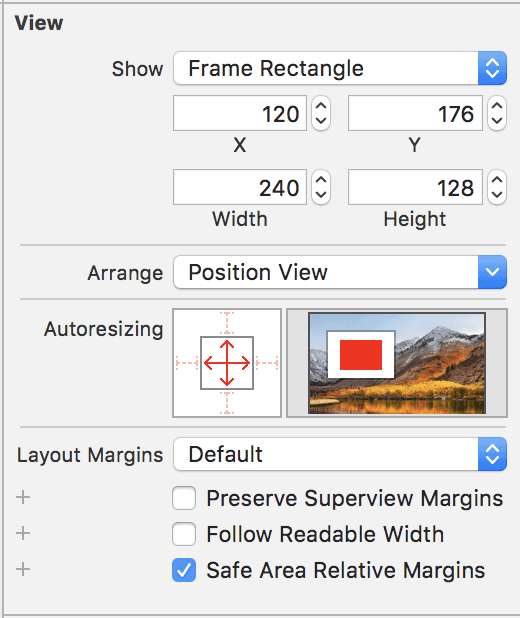 That leaves us with the following:

That’s where we’ll use react-native-splash-screen.

First install the package and then link it.

We then need to configure the package. From Xcode open the AppDelegate.m file.

We’ll then add #import “SplashScreen.h" with the other imports and then add [SplashScreen show]; just above return YES; in the didFinishLaunchingWithOptions method. 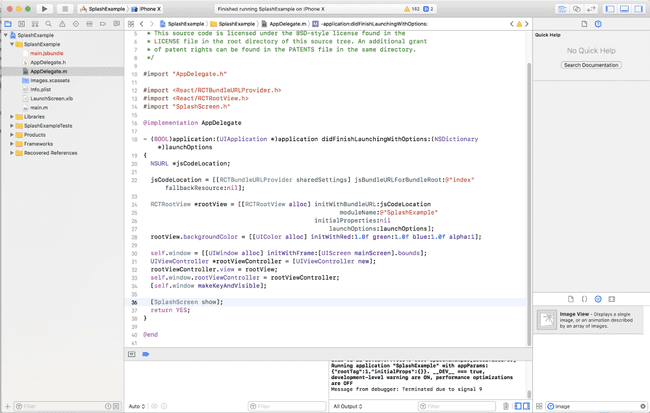 Finally, in App.js, we need to tell the splash screen to hide once our app is ready. We’ll do that in the componentDidMount lifecycle hook.

Woo! Looking good. One last nitpick. Let’s set the statusbar color to light when the splash screen is shown. Open Info.plist in Xcode and add a new row to it. The key should be “UIStatusBarStyle” and the value (a string) to “UIStatusBarStyleLightContent”. 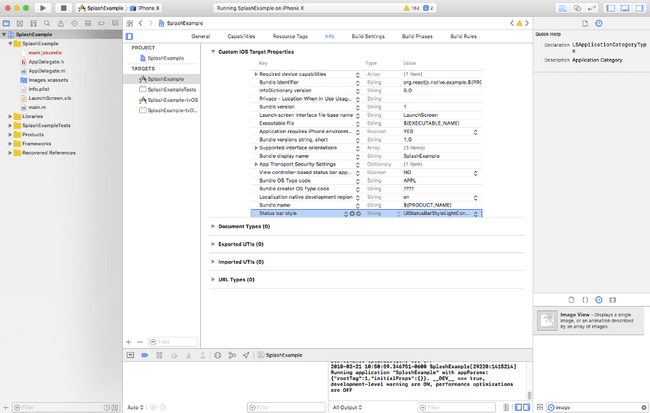 And that leaves us with perfection

If you’re new to Android Studio the video may help you more easily follow along.

Android is a touch more complicated than iOS because we need to create two separate splash screens. One is used by react-native-splash-screen and the other is used before the app “inflates”. It’s also probably more difficult because I’m not as familiar with Android Studio. 😄

The first think we’ll do is add the image assets you previously downloaded to the mipmap directories in the android project. Android handles different pixel densities different than iOS so we’ll have to make some modifications.

First of all the mipmap folders exist in android/app/src/main/res and each pixel density has a different density appended to the directory name. Here’s where images should go

Once there rename the files so they’re icon.png instead. 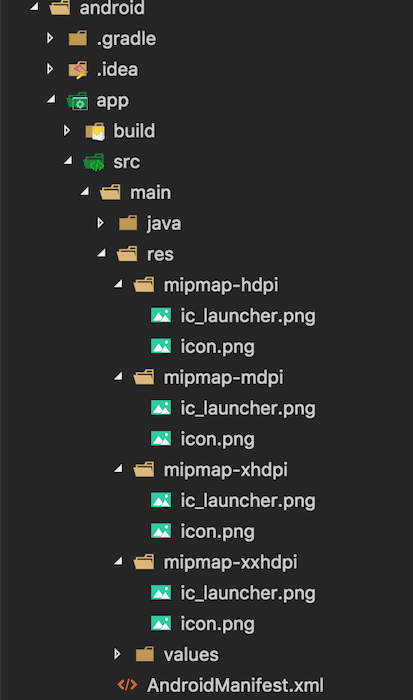 Next we’ll go ahead and create the splash screen that is displayed when the app first launches from a cold start.

These instructions are highly influenced by this excellent guide by Big Nerd Ranch. It explains the why behind what we’re doing.

First create a background_splash.xml file in android/app/src/main/res/drawable (you’ll likely have to create the drawable directory). 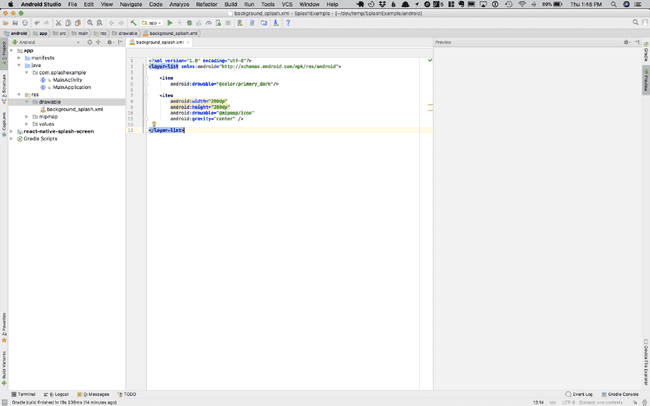 What we’re doing here is setting up a layer-list (a list of layers) then setting a background color (which we'll define shortly) and finally rendering our icon. The icon will be 200dp tall and wide and centered in the screen.

Next we’ll create a colors.xml in android/app/src/main/res/values in which we'll define our blue color (which is the same as the blue in our application).

Then we create a new SplashTheme in the android/app/src/main/res/values/styles.xml file.

While we’re here let’s go ahead and ensure that the default StatusBar of our primary app theme defaults to the correct color as well. That leaves us with a styles.xml of:

Now we need to tell our app to use the SplashTheme initially. We'll do that in AndroidManifest.xml. Inside of <application></application> add

And modify the MainActivity to be the following. Pay special attention to the android:exported="true" I added.

That leaves me with an AndroidManifest.xml that looks like

Now we need to create a SplashActivity.java file. 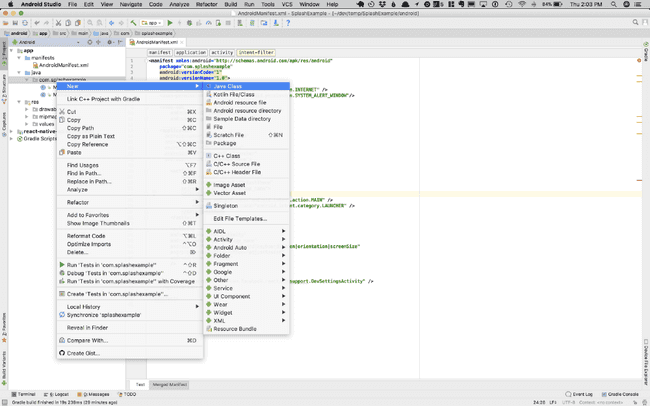 The purpose of this SplashActivity.java is to forward along to our MainActivity (the React Native app). It should look like this

Now, assuming everything is set up correctly, if you run the app then quit it (so it has to do a cold start) you should see the following.

Looking pretty good! We get the launch screen right away but then we get that white flash again…

Fixing it isn’t quite as easy on iOS, but still not too difficult.

If you haven’t already, install react-native-splash-screen and link it.

We then need to configure the native android side.

Then configure App.js in your application, if you haven’t already, to close the splash screen as soon as the app loads.

Then you’ll want to create a launch_screen.xml (name matters!) inside of android/app/src/main/res/layout with a root element of LinearLayout. 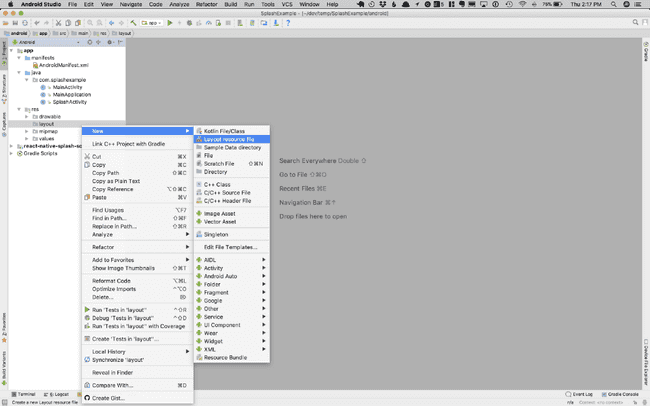 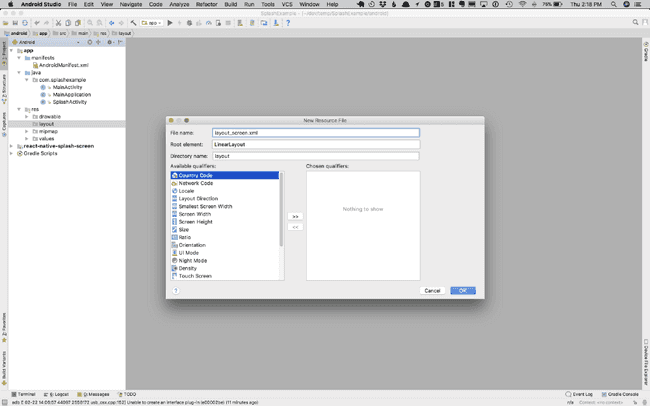 Android Studio has an interface very similar to Xcode’s interface builder, but I’m not sure how it works so I’m just going to modify the elements directly.

First I’m going to set the gravity of the LinearLayout to center and the background color to blue. The rest is default setup.

I’m then going to render an ImageView to render the icon inside of the LinearLayout.

About the properties on the ImageView.

Finally, inside of the colors.xml file we need to add:

Otherwise the app will crash. This is a bug in react-native-splash-screen and may be fixed in a future release.

I hope you found this helpful!